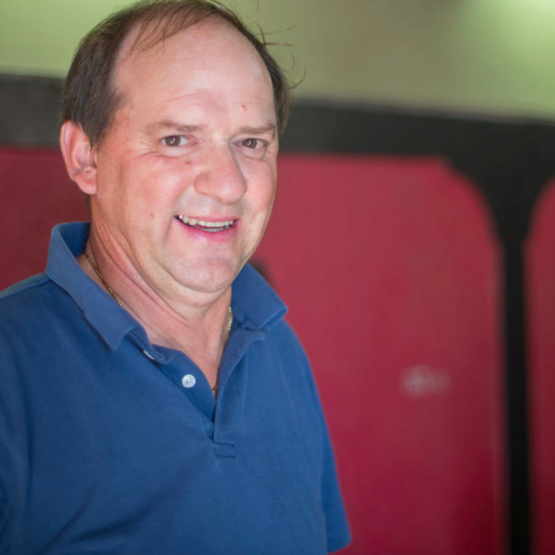 The wines of Denis Bachelet have a cult following. Out of the countless people to whom his wine have given such pleasure, very few know the young man who makes the wines, as until this year and despite more than two decades of exporting to the United States, Denis had never set foot on this side of the Atlantic. When people visit the cellar for the first time, the reaction is always the same. It is hidden behind an unassuming door in an old building, which used to be the post house for Gevrey under LOUIS XIV. One first steps inside a small dark room used by Denis to prepare and stock his orders prior to pick-up and delivery. There will be usually one or two small shrinked wrapped stacks of wine waiting for Belgium, England, or the United States. Denis will introduce himself, insisting that he speaks very little English, before carrying on cheerily in excellent English. He is always curious about his visitors, wanting to know where they come from and if they are members of the trade or if they are customers. After introductions, he will lead you to a door, directly opposite the one you came in. Behind the door there is a barrel cellar the size of a very modest living room. « There it is », Denis will say, « my entire current vintage ». Invariably, jaws will drop. Eyes don’t even need to circle the room to take it all in. There are four rows not even ten barrels long. Sometimes they are double stacked, often only partially and sometimes not at all. It is disparately small compared to the fame of the estate and looks barely enough to carve out a living. And then one realizes that these barrels contain not one but six different appellations, the meager one or two-bottle yearly allocation of Bachelet’s Charmes Chambertin suddenly become one’s most treasured possession. The estate is short of three hectares. The vines were inherited by Denis’s father from his parents, but he left for Belgium in the sixties to pursue love and a different career. Denis went to live with his grandmother, began working the vines in his early teens and made his first vintage in his late teens. Those were the great wines he made from the start. Denis has very old vines to work with, 100 years for the Charmes, 80 for Corbeaux, 65 for the villages and more than 30 for the Cotes de Nuits Villages. Certainly that is great matiere premiere to work with. But despite the fact that he could really every drop his grapes produce, pitifully low-yielding old vines are not enough for standards such as his. He prunes short and is despotic when it comes to instructing harvesters to sort everything that is not perfect. And that’s about it. Everything else is straightforward and natural, no yeast, no filtration, long ageing on the lees if they are healthy. After the cask tasting, Denis will lead you down traitorous stair to an even smaller bottle cellar to taste the previous vintage. It’s hard to believe that up to a few years ago, before he could afford temperature control in the upstairs room this was the barrel cellar. On the floor there are groupings of a half a dozen or so bottles, all he has left of a few vintages of Charmes. One would not dare to ask him to open one. More often than not he does anyway. His wines are always among the very best in Gevrey.