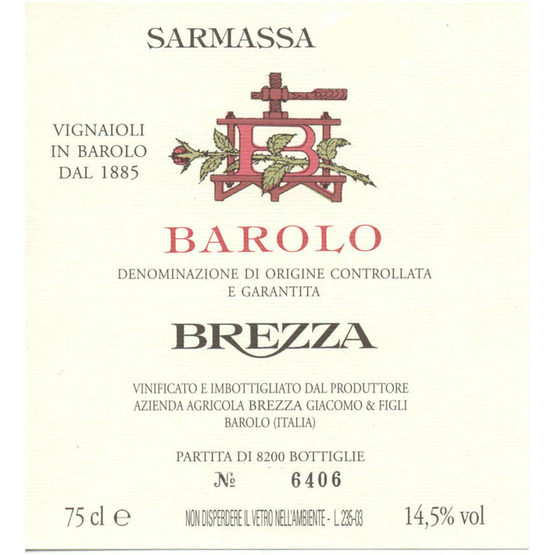 Soil characteristics
In ancient times, this area was called Salmassa, a name that probably originates from a source of brackish water welling up in its vicinity.
The soil of this vineyard, as is in the towns of Barolo and La Morra is made mostly from SANT’AGATA FOSSIL MARNE (TOV). The wines produced here are of grater quality in dry years: in fact, the highest percentage of clay and silt ensures a larger water retention, resulting in less stress on the vines that dwell in this land.

Production process
The winemaking system is one very close to the traditional method for Nebbiolo from Barolo, with a difference in the length of maceration which in this case is generally higher because the grapes have usually softer tannins.

Serving recommendations
Barolo coming from this vineyard is much more elegant resulting in an earlier readiness for consumption. The usual combination suggest the game and read meat but given its elegance, goes well also for the whole meal. This Barolo produced by the family only in great vintages with an indication of the MEGA (Additional Mention of the Geographic) in about 9/10 years after the harvest you will have a great wine for conversation and therefore only recommended in very good company.