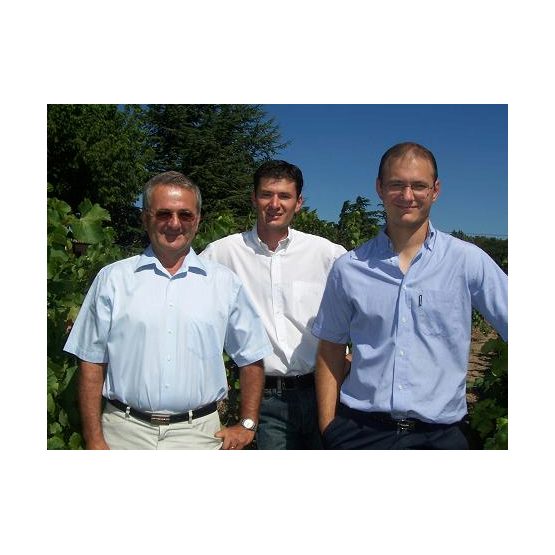 In 1320, Pope Jean XXII had the first vines planted in CHATEAUNEUF DU PAPE. But only in 1360 did the vine acquire a certain importance, first with the white wine drunk by Innocent VI, then with red wine; but these products remained little known. Only from the 18th century onward, did the vine occupy the territory and papal wine begin to be famous.

In the Jaume family, the generations have perpetuated the profession of winegrower since Mathieu JAUME decided, in 1826, to grow vines in CHATEAUNEUF DU PAPE. The successions were assumed by Marius, Fernand and Roger.

In 1979, Alain and Odile JAUME carried on the family tradition with the creation of the GRAND VENEUR. At the beginning, the vineyard extended over 22 acres. Over time, the vineyard grew to today's figure of nearly 170 acres spread in the CHÂTEAUNEUF DU PAPE, LIRAC, CÔTES DU RHÔNE VILLAGES "Les Champauvins", and CÔTES DU RHÔNE areas.

In 2003, a new estate of 50 acres was acquired : the "CLOS DE SIXTE" Appellation d'Origine Contrôlée LIRAC. This appellation located few kilometres from Châteauneuf du Pape (in front of it when you cross the RHONE river), is one of the fifteen Crus of the Rhône Valley. However, the soils are unique and they look like the plateaux of Châteauneuf du Pape with sandy-clay earth and the famous rocks that cover the soil. For many years, LIRAC had less reputation than Châteauneuf du Pape, but it is potentially the coming "OUTSIDER" of the Rhone Valley.

Over the years, the family has grown, too. Today, Sébastien and Christophe are gradually taking charge of the management of the estate. Sharing the family know-how, they have to put to maximum advantage their knowledge in wine-growing and wine-tasting.